@elitedam wrote:Yeah, coaching is a huge problem, at all levels. It feels like we're so far behind in that aspect. I don't know how you fix things with the way the CBF is. It's such a shitshow. A bunch of incompetent, corrupt fucks.

Before Scaloni took over it was the same with AFA and still is. Let's not forget he was an assistant and caretaker before somehow managing to land the job permanently.

As for criticising Scaloni, he has made weird decisions like not calling Ocampos and Foyth.

Also don't agree that he has improved our defence. We have just become a more defensive team, which seems to be the way forward for international competitions.

Yeah scaloni is a literally nobody , did not have the cv for such a job. But we must admit he has not put a foot wrong the entire competition, started the right players, made the right changes, etc.

Still his tactics are "score early then fall back", which worked , but will it work at the wc? Doubtful

WC is childs play compared to war in Copa. Still don't understand how FIFA hasn't demanded the same protective officiating for Copa that Euro's and World Cup enjoy. It's like 40 years behind. That's probably why defensive play wins these tournaments, defenders get far more from refs than attackers.

Finally, they have a solid keeper, solid defense, and a decent midfield. And a decent coach. This team can reach WC semi if they continue working together.


This is definitely not the best Argentina team I've seen in ten years. At all. However, it's the only Argentine team that won since Mark Whalberg was Marky Mark so...yeah why not.

I am happy to disagree with you. For me winning matters. this may not be the most entertaining team but they know how to win. what's the point of entertaining all and then losing vs. a B team of Brazil (you know what I am referring to)

@Harmonica wrote:WC is childs play compared to war in Copa. Still don't understand how FIFA hasn't demanded the same protective officiating for Copa that Euro's and World Cup enjoy. It's like 40 years behind. That's probably why defensive play wins these tournaments, defenders get far more from refs than attackers.

9 yellows in the game. Would be interesting to know the average no. of yellows per game in Copa.

@BarrileteCosmico wrote:Yeah scaloni is a literally nobody , did not have the cv for such a job. But we must admit he has not put a foot wrong the entire competition, started the right players, made the right changes, etc.

Still his tactics are "score early then fall back", which worked , but will it work at the wc? Doubtful

this is exactly what disappoints me too. Look at the game vs Colombia, Chile (both Copa and WC) each time they dominated, took the lead and went off only to allow the opponent to come back. Any strong EU side can take advantage of this 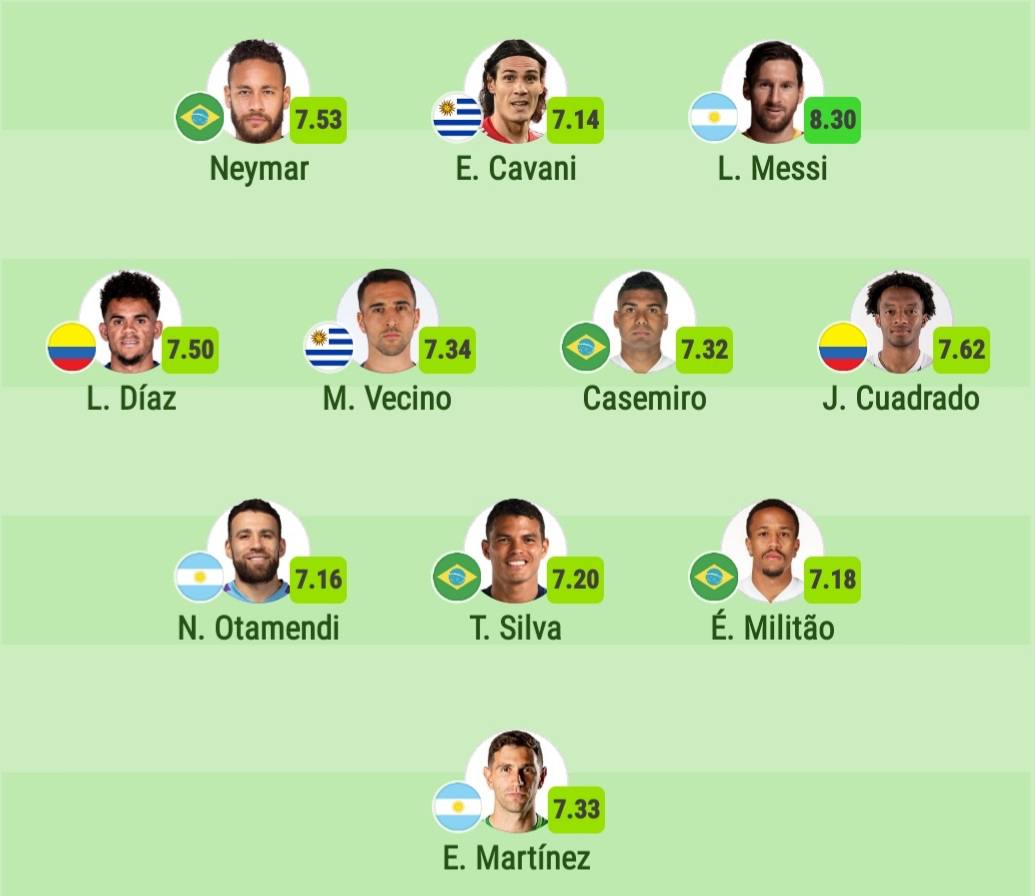 @Harmonica wrote:WC is childs play compared to war in Copa. Still don't understand how FIFA hasn't demanded the same protective officiating for Copa that Euro's and World Cup enjoy. It's like 40 years behind. That's probably why defensive play wins these tournaments, defenders get far more from refs than attackers.

9 yellows in the game. Would be interesting to know the average no. of yellows per game in Copa.

Congrats to BC, danyjr, and other Argentina (& Messi) fans. Argentina finally managed to win a trophy since I watched football. Messi finally gets his long awaited international trophy.

The early period was really scrappy, so many fouls, not many chances. But then a lapse of concentration by Lodi, superb vision by De Paul, and a moment of clutchness by Di Maria led to the only goal in a not so great game.

Brazil then managed to regain the ascendancy by simply adding Firmino to their forward line, which freed up Richarlison on the right several times. An offside goal, a shot saved by Martinez, and another offside I think. Acuna had to look at Firmino and nobody was close to Richarlison. Lo Celso should've help there

But then Tite overdid himself, putting Vinicius and later Gabigol, changing the formation to 4-1-1-4 with Neymar as the -1-. And focusing the attack more on the left through Vinicius dribbling. They had so much success down the right just before. But perhaps Lo Celso who's on yellow being replaced by Tagliafico helped solidify Argentine's left side. Then on the later minutes of the game De Paul put Messi through, but he slipped

Good that Argentina managed to hang on to the win, or else that moment would be the maint discussion

Turns out Emi Martinez, De Paul, and a fit & performing Di Maria are the key for Argentina's success. Emi Martinez was brilliant, important saves, and was very alert. De Paul was my MOTM. He defended well, kept the midfield ticking, and produced the 2 biggest chances for Argentina, which 1 was converted by Di Maria.

Di Maria who was largely supersub before, was very fit in this game. He was injured in 2014 & 201, and unfit in 2016. But here he produced another clutch final display, such a cool chip. Montiel also performed well I think. He defended the late barrage of attack down his side, even literally bloodied himself. Messi carried Argentina to the final as he always did but Argentina are able to carry him to win the final this time.

However as for Lautaro Martinez, I guess he occupied the defense

I only saw him touched the ball like three times. If the ball was passed to the left, it's either Acuna or Lo Celso and not him.

All in all, a huge moment of relief for Argentina and Messi. Also, salute to Neymar, a guy who I largely dislike due to his antics. The commentator here were anticipating Messi to console crying Neymar. But instead, Neymar walked to Messi, gave him a long congratulations hug, gave hugs to his PSG teammates, then congratulating the other Argentines. Good sportmanship there by Nerman

I only watched the final and it was a huge struggle.

Hardly any football played, just a ton of fouls and aggressive actions. It was a war out there for real.

Terrible error from Lodi and with the game going the way it was, not surprsingly it proved fatal.

Felt like Argentina sat back after the goal so much, they were asking for trouble but Brazil couldnt find a way through.

I havent watch Brazil in a while now, but Fred and Casemiro have the be the absolute worse pairing in midfield I can think of from Brazil in a major tournament.

The two of them are incapable of successfully controlling and passing a ball twice in a row.

Superstone spot on comments , agreed with all. Lautaro had a sacrificed role, pressed well, even if he didn't have many chances it was appreciated.

Franchise that's been our MO the entire tournament. In fact theres a meme that kind of goes:
First 15 mins: this is football champagne
Rest of the 1st half: ok some things to improve
2nd half: ih God what is this

And it applied to all games

Yes, reading through the comments it seems a pattern everyone has accepted.

I dont know how that translates to the WC, I see Euro teams constantly getting punished for such negativity and the level of physical aggression on display in this final, just seems like a red card waiting to happen.

The game ended pretty tactical imo. Argentina provoking trolling Brazil with the result in their favor and Tite trying to make something with attack but clearly didn't have the punch to break Argentina. The World Cup has had refs that let these things slide so ultimately that's what it comes down to.

Uefa and Conmebol in talks of having official super cup between Italy and Argentina, now that Fifa abolished Confederations Cup. Perfect idea, and bring on Italy.

They got rid of Confederations Cup?!!!

FIFA wrote:In March 2019, FIFA confirmed that the tournament would no longer be staged, with its slot replaced by an expansion of the FIFA Club World Cup, as well as the 2021 FIFA Arab Cup as a prelude to the 2022 FIFA World Cup.

Wallahi ffs you couldn't make this shit up

Yeah fcking random thing to do. And pretty big indication of oil money running things. It was called King Fahd or something cup back in the day though.

"Argentina and Italy will play the Diego Maradona Cup. The match is expected to take place in Naples either in December or January with an official announcement soon. This per TNT Sports." via RoyNemer on Twitter 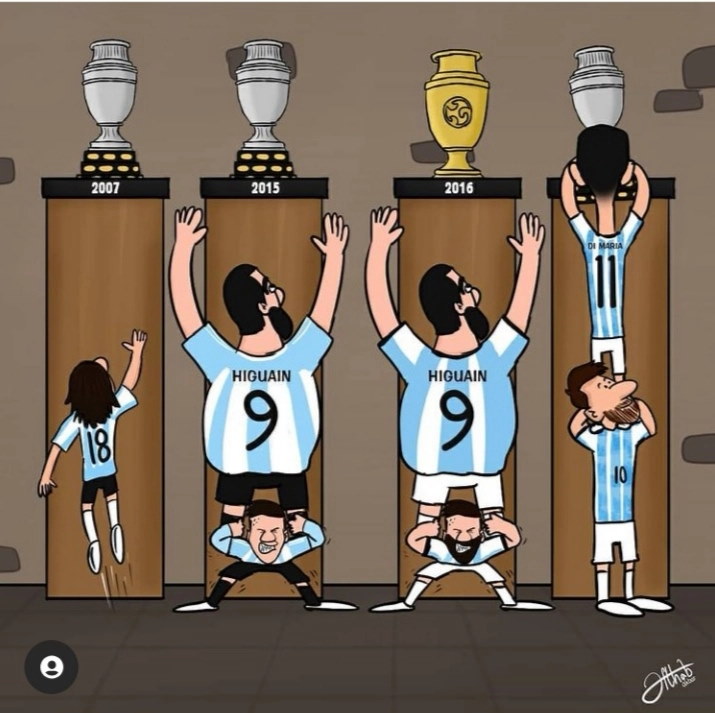 Can't tell from this angle, is this Higuain missing a decisive penalty in a Copa final?

With three Higuain 1on1 misses, which could've been match winners, Messi missed a World Cup and 2 Copa's.

Messi missed his own easy chances and a decisive penalty in those finals.

He's a co-defendant in Argentina's choke jobs, not a victim.

Messi carried Argentina with four legendary performances, but didn't get help from Higuain that Maradona for example got from Burruchaga and Valdano in the final of 1986. Luckily Di Maria was kept under wraps this year, so he wasn't broken and could score being fresh in the final, when all eyes were on Messi.

Legendary in terms of hockey assists and successful dribbles? maybe.

His "legendary " performances included 0 goals in world cup knockout stages and 0 goals against any of Argentina's direct rivals in Copa America.

But I'm sure his brace against Bolivia this year and his destruction of Panama in 2016 will go down as some of the most memorable moments in Argentina's football history.

And who can forget that marvelous finish against mighty Nigeria? 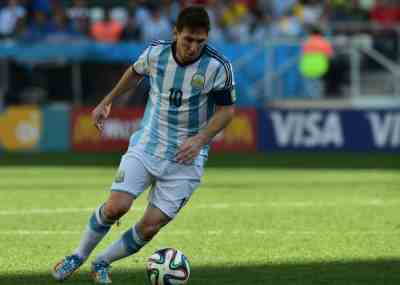 World Cup performance index, considering statistics, the best (and worst) plays, importance and relation of quality of opposition and own team. Color highlighted as golden, silver, bronze ball, or not in Top 3.

Too bad Higuain couldn't score in the final like Valdano.

Page 26 of 27
Permissions in this forum:
You cannot reply to topics in this forum
Latest topics
» 2021/2022 Premier League Discussion