varane the french starlet who plays for lens
http://www.usatoday.com/sports/soccer/2011-06-23-3721194332_x.htm
Martel, whose club was demoted to the second division for next season, told Lens supporters that they shouldn't bemoan Varane's departure as he would have left even if the team had stayed in the top flight "because he is phenomenal."
The 18-year-old central defender was also courted by Manchester United and Paris Saint-Germain but Martel says "I will be proud to see him play in Real colors."
Varane has already met Madrid coach Jose Mourinho and Zinedine Zidane, who acts as an adviser to the club's president.
According to L'Equipe newspaper, the clubs have agreed a —10 million fee and Varane will sign a five-year contract on Monday.

as said in the RM section, this is not a wise decision from him.

should have gone in a club like PSG where he could have had more game and keep on developping,
but RM is a step too far and it will be Canales (& others) all over again.

i dont see Mou giving much game time to a 18yr old that only had 1 season in L1 and who doesnt even still knows whats his best position between CB & DM.

but as some said he might just get loaned elsewhere, that would already be better, but still..

lets see how it goes 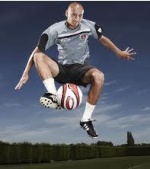 Expect him to be loaned, Mou isint fan of young talents so yh, sad but true.

he is probably going back on loan

so the next garay lol ?

Cant understand some of these players smh. Learn from Sakho, he rejected Arsenal at 17 just because he knew he can develope better in France and will eventually move once he knows he can slot in nicely to any league or team

hopefully he is the next varane...

hard to say no to zidane and mourinho when they tell you they have a plan for you... it makes sense he stays in france for at least another season.

Our new project is sick

Madrid do need a new CB.Carvalho is past his best,Garay and Albiol arent good enough so he might get more chances than everyone expects.

This is a good move we needed a defender.

Cant understand some of these players smh. Learn from Sakho, he rejected Arsenal at 17 just because he knew he can develope better in France and will eventually move once he knows he can slot in nicely to any league or team

You do know Garay has been injured alot ?

I read somewhere that Mou will watch him carefully through preseason and asses him performance and where he will fit in he may decide to loan him back to France anyway so I think people are getting ahead of themselves by saying his career is ruined.

@Devil-is-red the president of Lens said that Zidane and Mourinho have been watching him for the past 3 months so maybe its United that thought oh RM are interested in him lets get him.

@Devil-is-red the president of Lens said that Zidane and Mourinho have been watching him for the past 3 months so maybe its United that thought oh RM are interested in him lets get him.

guys many big clubs were aware of his qualities and have been watching him for months,
so you can be sure that it wasnt only Real or MU

we are just locking up a player for the future, we will give him time to develop into the player he is meant to be in france. Wonderkid in defense dont run around the streets.

Gago and Lass leaving. Altintop having back surgery = playing time for Varane in DM and CB when needed.

If RM were interested in him, I take back what I said. i didn't know they were.

Good luck to the kid.

You're just assuming he'll go the same way as Gago, Canales or Drenthe.
What if he developes like Marcelo or Higuain? Remember as well... Garay has been injured for most of his time at madrid. When he's played he's been quite impressive. Same can actually be said for Canales and even Gago

uzonero wrote:I don't think this is a good move for both the club and the player

Would u care to explain?

Zidane said / wrote:He is a very talented and promising player. A player of interest for RM and for me, personally, i like him a lot. He's a kind of CB that you dont usually come across. Since Blanc, there hasnt been a lot of CB with such calmness, and in that sense he is a lot like Blanc. I havent seen a lot of players like that.

a great deal imo. madrid got themself an excellent prospect... i expect madrid to loan him straight back for at least 2 more seasons in the ligue 1...

Now our best defender in a matter of 2 years

BOW DOWN TO RAPHAEL VARANE

Today at 9:36 pm by The Demon of Carthage

Today at 9:13 pm by VivaStPauli

Today at 4:49 am by BarcaLearning