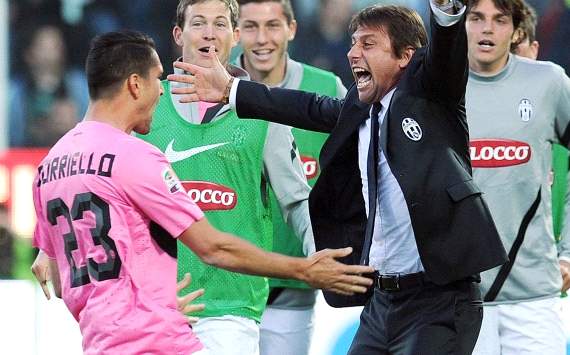 The game at the Dino Manuzzi took place on the anniversary of Fortunato's death, the once-capped Italy international passing away on April 25, 1995 at the age of 23 after contracting pneumonia.

Consequently, while Borriello was delighted at finally having got off the mark for Juve after arriving in Turin on loan from Roma in January, as well as helping the Bianconeri take another major step towards the Scudetto, the significance of the occasion was not lost on him or his team-mates.

"It is an important goal, which we are dedicating to Andrea Fortunato," the striker told Sky Sport Italia after the game.

"It's a goal that is worth three points, but there are still four games left and it will not be easy, as we have seen today against a Cesena side that were almost relegated going into the game.

"But there's no time to celebrate because in a few days we must face Novara."

Borriello admitted, though, that he was delighted to have broken his duck for the Bianconeri.

"Today I felt I was going to score and I had said it to the guys on the bench," he revealed. "I arrived in poor condition, but I'm now hoping that the goal will give me more confidence."

Bravo and TY to the dedication ...I hope u start scoring like in Genoa/Milan and Roma first half

Everybody in the team loves conte, even though they dont play! Respect

salmano9 wrote:Everybody in the team loves conte, even though they dont play! Respect

Similar topics
» Juventus for Borriello we are close to final. The Genoa tomorrow will bid for Amauri to Juventus
» Offical: Martinez is a Cesena Player
» Juventus vs Cesena
» Cesena vs. Juventus
» Juventus Vs Cesena

Page 1 of 1
Permissions in this forum:
You cannot reply to topics in this forum
Latest topics
» Most controversial World Cup Golden Ball's since 1966

Yesterday at 11:34 pm by Casciavit

Yesterday at 11:03 pm by Casciavit

Yesterday at 9:43 pm by Myesyats

Yesterday at 8:02 pm by BarrileteCosmico