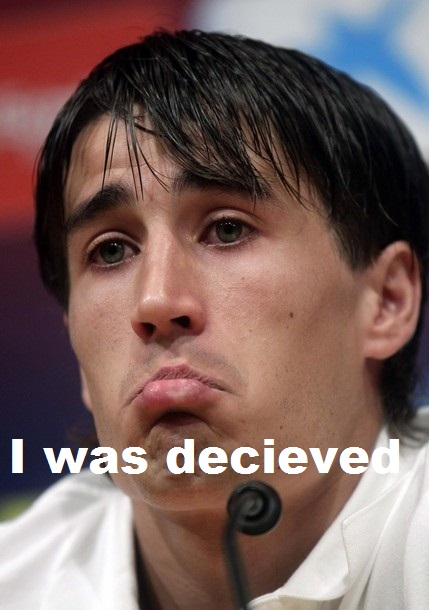 "Mourinho recommended Carvajal highly," he told the Express in Germany.

Which basically means that Mourinho want him to get some first team experiance to continue develop and then buy him back..
_________________
Im in ur forums trollin' ur posts

why does he say he has BOTH Ramos and Arbeloa when Lass/Albitrolol are the ones who are in stand in duty when Arbeloa gets suspended?? its not like we are short of CB to let Ramos step to the side and let Varane cover for Ramos in the middle

advertising at its best

there were a couple times last season when ramos went back to RB, but ya literally only a couple i think he filled in twice maybe 3 times.

Bayer Leverkusen defender, Dani Carvajal feels he is ready to return to Real Madrid after his one year at German Bundesliga side, Bayer Leverkusen and is confident he can play at the highest level of European competition.

In an interview with Spanish sports daily, Marca, Carvajal spoke about what he learnt from his year in Germany.

“Loads, mainly about living on my own and competing among the best, in European competition. On a personal level, you mature a lot. A year ago I was the youth academy player who opted to go away to improve and, a year later, I’ve done that. Tactically speaking, I’m better. Going up against world class footballers makes you improve. I’ve fine-tuned the points where I was strong, like speed, along with anticipating and crossing the ball.”

Carvajal then stated that he hasn’t changed his style much since living Spain, despite the differing styles of play.

“I don’t think [I’ve changed my style]; Bayer knew who it was signing, because of its system, because it likes defenders that attack. The thing they ask me most is to attack even more, although I also like to be solid in defence and do that right. Things they can tweak are that you pass more accurately or positioning yourself between your opponent and the ball…”

Carvajal concluded by adamantly stating that he was ready to return to the Santiago Bernabeu.

“I have faith in myself and I feel ready to go back to Real or to play in the Champions League with Leverkusen. I think of myself as a Madrid supporter, I was born a Madrid fan, I wore the shirt for 10 years and Madrid is in my blood. At the moment, I’m with Bayer until 2017 and I don’t know if I’ll go back.”

The lad is f**king immense. I honestly thought he was all hype and a Whorescored creation but he's actually very good.

Been watching Leverkusen games solely for Schurrle and along with Bender he's the player that impressed me the most.

Not sure if two gung-ho fullbacks would work though.

If we don't bring him back Perez must go

@Gil wrote:
Not sure if two gung-ho fullbacks would work though.

@Gil wrote:
Not sure if two gung-ho fullbacks would work though.

A few days ago Coentrao said he might leave Madrid, he feels he is not wanted here. but even if he stays Marcelo's gonna take over the LB spot from him next season.

@Zealous wrote:Carvajal is a pitbull on defence btw.

@Zealous wrote:Carvajal is a pitbull on defence btw.

Pitbull in the sense of aggressive, yes, but tactically he is now way on that level yet.

when i first saw him play he reminded me of Michel Salgado. He has great intensity and I do hope we get him back, i really dont want someone like Lichsteiner when we have this guy
_________________

I have a dream about this magical 5 man defense we could potentially have - one that unfortunately never materialize.

@Le Samourai wrote:I have a dream about this magical 5 man defense we could potentially have - one that unfortunately never materialize.

Give elite gamblers some collateral.

@Le Samourai wrote:I have a dream about this magical 5 man defense we could potentially have - one that unfortunately never materialize.

Give elite gamblers some collateral.