@niron wrote:a bit too melodic for my tast. i am very excited about the new smashing pumkins album this year, though only billy is left.

Red&black what kind of music do they play?
They feel like 70’s prog rock or something

@billy_gr wrote:Red&black what kind of music do they play?
They feel like 70’s prog rock or something

Cant really categorize them.I guess progressive Rock is the best description. They are similar to Yes and and Kansas kind of.

When I start playing bass 70’s prog was my favourite rock genre.
If you like them you should also try Transantlantic.

@billy_gr wrote:
When I start playing bass 70’s prog was my favourite rock genre.
If you like them you should also try Transantlantic.

Ive heard of them.Havent had the opportunity to listen to their songs. Didnt John Myung(Dream Theaters bass player)play on the first album?

Mike Portnoy was certainly among them. AS for bass I think it was Marillion's bass player.

@niron wrote:a bit too melodic for my tast. i am very excited about the new smashing pumkins album this year, though only billy is left.

The last one wasn't exactly a masterpiece, and if they could get the old crew back together then I think they would still have some legs as a band, but I'm hoping even by himself Billy can give us a few final songs worth playing over and over again

On another note, I am officially going to be seeing the Red Hot Chili Peppers on June 1st in Detroit, as well as Iron Maiden and Alice Cooper on July 18th. I already have my tickets. I've already seen the latter two, but I've decided to spoil myself after missing out on seeing Van Halen last month (my friends deceived me into thinking they would go with me, but then backed out, so I suffered

Bow down to your masters

That was in Toronto! I was there, amongst all the people jumping up and down in front of the stage

my favorite band is Canadian.
Damn half a world away....


anyway, here's the song I can't get out of my head the last week

Bow down to your masters

That was in Toronto! I was there, amongst all the people jumping up and down in front of the stage

Been butthurt ever since.

Listen to these guys . Brazillian new kings of metal.they are like the new Metallica/Maiden.
https://www.youtube.com/watch?v=b5QzJIU2uoE

yes like i mentioned, Children of Bodom of Finland and Arch Enemy of Sweden is my favorite. Alexi Laiho of COB, is not only fastest and one of the most adored guitarist amongst metal community atm but i love this guy so much, lol really i would go gay for him hehehe. man he looks girly and he plays sexy!!! <3 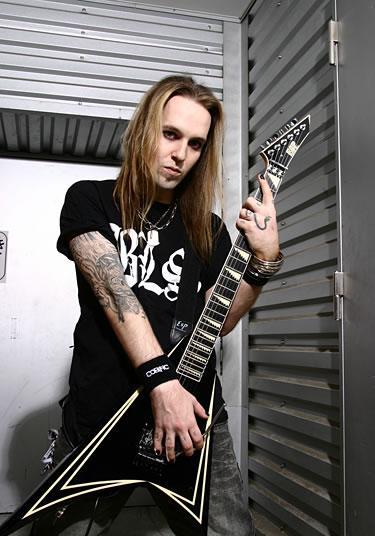 Alexi laiho with his signature ESP Sawtooth, he previously endorsed Jackson Stars RR-J2SP, which i thought he looked not only cool but sounded way more awesome.

guy plays absolutely awesome, he nails solos so awesome, and his creations are absolute masterpiece, a work of art, his guitar work constitute of quality and complexity combined with technical excellence, *major and minor scales, other classical scales, diminished sweep arpeggios, whammy bar harmonics, tons and tons other whammy bar squealing tricks and pretty strong pentatonic influences *like the one Zakk Wylde does not just speed but also precision, creative, solos are mesmerizing to hear, to see him play is absolutely fun, and guy is so funny. and i love him. anyway his guitar work is influenced a lot with classical stuffs that he derives those influences in his music with rock/metal/punk rock metal, there isnt any precise kind of genre that defines children of bodom actually i have been fan of metal music for all my life but alexi*s music is something awesome cool and refreshing.


sometimes his musics his solos are overly complex that it is too hard even for him to go through. but one of the things i love about alexi laiho is that he worked hard all the way through stature he is now, he is one of the metal legends at such young age, and his musical background comes really deep having played classical music at very young age, playing violin at like age 8 or something then switching to guitars after hearing his sister rock collection.
his guitar influences his guitar heroes are obviously from early 80s 90s metal music like rock bands poison, GNR, and metal bands like metallica, slayer, sepultura etc. his guitar idols are Randy Rhoads, Zakk Wylde, Steve Vai, Roope Latvala *who happens to be his band mate now since Sinegy days.


here are some of his guitar epicness videos check em out guys its awesome! btw in first video, its his band mate, and his childhood idol, Roope Latvala who is also a guitar legend in finland and is a reknowned guitar player from band Stone, Sinergy *with Alexi Laiho, then later joining Children of Bodom.

another video, is Alexi and Roope playing Vivaldi.

some guitar lessons from Album.... Hate Crew Deathroll, .. that particular guitar work lesson is taken from the song You re better dead off... lol funny thing about this album is that it took him just like a week to come up with all the music, and heard that he pretty much finished off the album within 3 months.... crazy talent....

one of my favourite albums of COB...

and this video is a DVD guitar solo instruction, from a song Bodom Beach Terror...

children of bodom is his primary band, his baby... and he has a full time commitment to his band to this day, but if u listen to sinergy * band formed by him and another great swedish guitarist called Jesper Stomblad, actually thats where my username is derived from lol... anyway.... yes if u guys listen to Sinergy, man..... Alexi blows your mind with solos.... unbelievable creativity.... in the album called Suicide by my side. Sinergy is atm disbanded... a band formed by Alexi ... Jesper Stomblad of ... In Flames, Kimberly Goss, Sharlee D Angelo who is also a full time bassist for my another favourite band Arch Enemy.

anyway i would be very happy to give my thoughts on Alexi Laiho and everything u need to know about him, his current or associated bands, guitar he uses, his history, anything u wanna know about him. 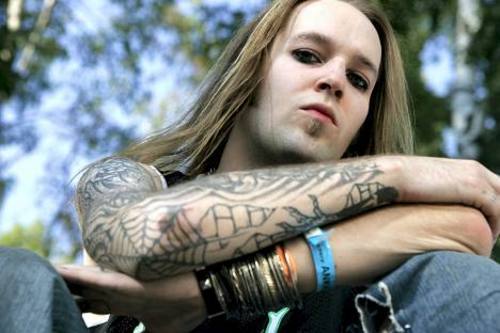 and the first ever song responsible for me to hook up with Children of Bodom, Thanks to MTV headbangers Ball...

Went to soundwave a couple of weeks ago Gojira, Trivium and Lamb of God destroyed everyone else there ZWBLS was very dissapointing.

Love COB but their last album was kinda disaapointing.

reckless rentless forever, few songs were pretty awesome actually but yeah i agree that COB has slowed their progress a bit.

you kind of wonder that ever since Alexander Kuoppala leaving the band and Roope Latvala one of the most skilled veteran joining the band will improve or make the band lineup even more strong but i m actually surprised that ever since Roope joined, COB has evolved massively u know...

at sinergy really i mean alexi and roope was just killer. in COB i dont know what to say man, its like u said, every year album has been a little bit disappointing.

maybe because now they are so f.. .kin popular that they are touring a lot, no breaks. and also mostly band just evolved ... the music.and once the band are at the pinnacle there is more pressure piled upon to make the album even better, but problem is COB has a little bit of poor consistency. but when they were to release EP like say tie my rope ... man they just make so awesome songs... before u can see more alexi putting awful lot of his talent and solo now i dont know how they are working with roope or how chemistry works... now they are just playing too much rock or thrash oriented metal and not enough melodic stuff like the roots they come from.

mine is obviously follow the reaper and hate crew deathroll

I kinda like all their albums except the last one

My favorite is Blooddrunk, I know a lot of people dont rate it very high,but i find it groovier than most of their other albums. I dont get tired of listening to it from the first to the last song.

The opening band was Little Dragon, who I found out tonight have a song in FIFA 12! I'm pretty jelly of the good people of Ireland who get to see Noel Gallagher open for them later this month though...

@Crimson wrote:Went to soundwave a couple of weeks ago Gojira

New album is awesome too

Iron Maiden and Alice Cooper live tomorrow in Michigan. Been a while since Maiden rocked my face off

@Eman wrote:Iron Maiden and Alice Cooper live tomorrow in Michigan. Been a while since Maiden rocked my face off

Ill see them soon too in LA yaaay .

Well, um, listen to the new Bowie album. It kicks some mainstream-pop-rap-crap ass!