they took part to a club tournament in madrid last year, and altho we lost to barca

, they were standout performers, and mounted an amazing come back at the end, and we only lost in penalties. Jose ROdriguez was voted best player of the tournament.

Pozo is ahead of his time, David villa like CF, short, really pacy and agile with good technique and a strong shot, scored 34 goals last season at his level. Rodriguez is more of a box to box CM with all around skills, he balances attacking and defending well.

Arsene already came for both

, and lately it's city who started snooping around Pozo... 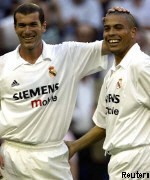 David Moreno? not a standout name from what i know.

That's the kid who scored in training right? not many names with strong reputation there.

and btw Moreno left the club like 2 seasons ago.

David Moreno was the most promising young madridista so far, he was called the new Messi. I have not heard about him since a while and the last information released was that he has been transferred to Zaragoza (2 years ago)

@estrella bernabeu wrote:David Moreno was the most promising young madridista so far, he was called the new Messi. I have not heard about him since a while and the last information released was that he has been transferred to Zaragoza (2 years ago)

Not a single game

WTF !!! watching him playing with the Juvenil and in the WC under 17 was just amazing, everybody has bet on him to become a Madrid star and surpass both Messi and CR.
Was he a long time injured, or had he a big problems or what the story exactly coz a skill like that can't be quickly burried.

Otherwise, Madrid use to make great players but by the end when it comes to integrate them in the first squad they leave us instead of other players (Sarabia >> Neymar).
AW, for sure, will get one of them

Injuries plus he's really small to begin with.About the same height as piatti and much less strength.Might recover and play for hercules tho.
_________________

But anyways, what has happened with Enzo? Is he living through his fathers name or is he really talented?

You never know with people this young whether their future will be good or not. You just cant tell. But anyway, this is good news. By the time Pozo is ready, Morata would probably(hopefully?) be our main striker, so he could have space in the team. About Rodriguez, we dont have many similar promising midfielders in Castilla, so good.

Omar, Enzo trained with the first team lately. That's all I know.

I really hope that madrid will give castilla players more opportunity to gain a spot in the squad.

Ace wrote:I really hope that madrid will give castilla players more opportunity to gain a spot in the squad.

Don't think so when you see Madrid battle for Neymar !! it's irritating (for me) and appaling for castilla players.
we have a really good squad (the best since a long time), so it's time to back up some youngs and integrate them with these stars, and even when they missed a match, the whole team perfomances can hide this fault.
Same Barça system !! just remember Abidal first steps with culés

Chel$ea ,$ity and Assenal are in negotiations with pozo.His contract us out this january.Frak off english clubs,cant create players for shit and now they are fishing in spain's best academies.Say goodbye to pozo guys .
_________________
#WEAREALLTAXFRAUDS

That's ok. Madrid promotes 1 cantera every 5 years or so... It's not like there are all these opportunities here. As long as they come to our academy and we have the option to go with youth if we choose, I'm fine with that.

then get them back later

Don't worry guys if they turn out to be awesome we'll just get them back. Of course I'd rather we promoted them ourselves but that's a bit hard at the moment.

English clubs only produce Donkeys. Of course they have to look elsewhere for talent.

Oh and BTW I rate Sarabia, Morata and Alex higher tbh. They took part in the same tournament a few years back were able to beat Barcelona in the final.
_________________

Alex and Carvajal are the ones to watch for in terms of making Madrid. Let's face it, CF is really not a place where there's room lol and Ozil is the AM. CM is where the opportunity exists and RB.

Well I'd like to think they have a shot Sport. I mean look at Callejon, he's great IMO and we didn't have to pay 20 million + for him.

The thing is most Canteranos have great heads on their shoulders. When Granero was asked about lack of playing time he answered "Mourinho is a great coach, if I'm not playing then it's my fault."

Callejon pointed to the crest when he scored his first goal. He said he'd defend it to the death at his presentation ceremony. Arbeloa is as Madridista as it gets as well.

A good core of players like that should be a part of the group. I hope a good number of the 5 boys, Morata, Sarabia, Alex, Carvajal and Jese make it (although that is very difficult) I'm sure the club would be better off for it even if they were just squad players.
_________________

I don't really like putting youth as squad players for more than 1 year... they should have an opportunity to become everything they can somewhere and that's not going to happen from the bench. If they go out there and realize that they will never become superstars or would settle for being a bench player regardless, then sure... they would make ideal squad guys.

Carvajal and Alex actually have a chance to become starters at Madrid because Arbeloa is getting older and CM will be available (unless we go out and sign a youth superstar). That's why i'm keeping a close eye on them. Hopefully, they get a shot next year to make the squad and perhaps start the year after. Carvajal really needs to work on his defense though... he's acting Brazilian lol.