We'll be top 3 this season... and either QF or SF in the CL depending on the draw.

Unless something drastic happens between now and the end of the month, i see us as the underdog among the elite.

Big reason is that CR is gone and we're asking Benz to become a match winner. Even if he has a good season, he's not that kind of player anymore.

@Mr Nick09 wrote:We are asking Bale, not Benzema, to become the match winner, providing he is fit.


he always was the second match winner. Benz was... whatever he was. Now Bale is top dog with Benz asked to be second. he's not a match winner at all... first, second or third.

I know his speed will be welcome here.

It's funny you look at all our kids and we are gonna be in a situation where they have to be good for us to succeed, simple as that. Asensio needs to step up big time this season, likewise for Ceballos, Llorente and Valverde if they both stay; we are also betting on Reguilon to be that back up for Marcelo.

News today is Valverde is staying and they are talking to Real Sociedad re Llorente.

Watching Willian jose score for La Real, and i am thinking, even he would do for backup
_________________
Madridista naci.. Vikingo sere y Merengue Moriré

and if Lope treats lazy players like last weekend, he can keep everyone on their toes. ZZ biggest virtue was being able to motivate these guys in important CL ties. Hope Lope has the same ability
_________________

I still don’t think this moves the needle enough for CL where the margins are so thin. Will definitely help in CDR and LL though when Benz hits an expected goal drought. I’m hoping he can replicate Morata figures off the bench when we won the league.

@halamadrid2 wrote:Anyone else more confident about our CL chances now with Mariano coming off the bench instead of Mayoral

and if Lope treats lazy players like last weekend, he can keep everyone on their toes. ZZ biggest virtue was being able to motivate these guys in important CL ties. Hope Lope has the same ability

this has to be a stretch, has to be....i like the move, as something is better than nothing, but come on, as of right now, on paper, mariano does not have that cache. hopefully he provides us with what we need , but come on, replacing cristiano with mariano (at least on paper) isn't a like for like move. but i'm glad he's here, let's see what happens

We are replacing Ronaldo's goals with Bale's. Bale is proven in the CL. And if Benz continues like he has he can replace perma injured Bales goals and Mariano will replace Mayoral last season.
_________________

True that. I hope we get a CB signing before the window shuts. CM I can live without.

The only thing in the works is Mario Hermoso, cantera who is CB (supposedly to let Vallejo go out on loan) and can also play LB. He is left footed.

There is also talk about Marco Alonso to allow Marcelo to join Ronaldo and Juve, but that story is nonsense and if it came about would be for next year not this. Interesting from my perspective is that they say Alonso can play LB and CB yet he hasn’t played CB for years and is more of a winger than LB. Maybe that is why they compare him to Marcelo!

Hopefully with any luck the away Roma game will just be a deadrubber: 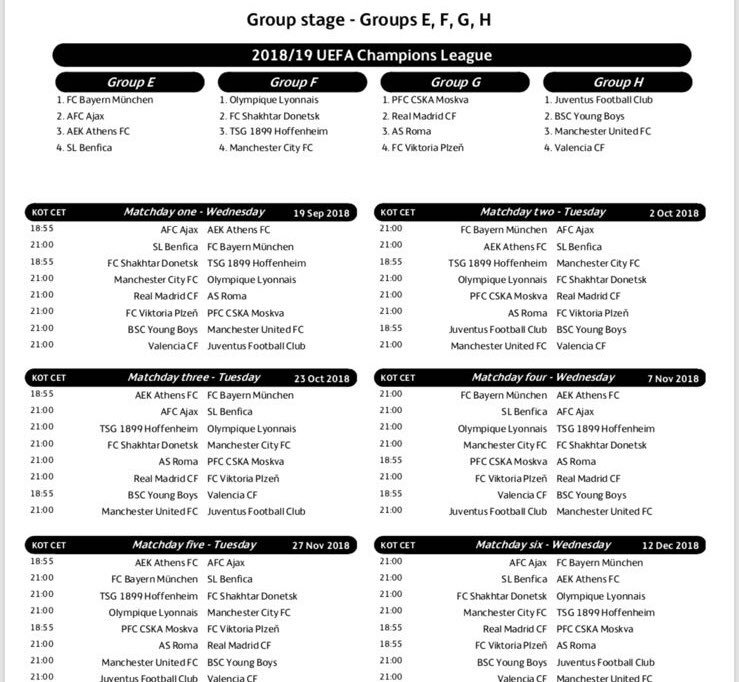 The home Roma game is sandwished between Bilbao away and Espanyol at home. The away game is inbetween Eibar away and Valencia. Hopefully we can rest our guys in Italy so we can go hard against the petty idiots

Lopetequi said in press conference that squad is complete! Yet he acknowledged that Mayoral will likely go out on loan today. Then you check the squad list and you see 4 porteros, Coentrao included and not Reguilion, includes Vinicius yet we know he is also on Castilla list!

I think he meant to say no new signing, i.e. Vallejo stays and Hermoso not returning.

Apparently Coentrao wants to return to Sporting, but wants Madrid to pay his 4M salary, last year of his contract, he is not included by Lopetequi. Madrid is prepared to pay 3M, but want Sporting are wanting him for nothing, both salary and signing fee for next year!

Club has option to keep Luca, Reguilion and Vinicius on Castilla roster and call them up when needed.

So we end up with
-4 porteros, doubts as to who will be #1 and two for practice role.
- two players on team, coach doesn’t appear to have confidence in, Vallejo and Llorente
- Nacho playing backup for both CB spots and LB. that’s too big a risk and therefore we will see Reguilon included, but that also a risk as that’s a big jump from 2B and given we didn’t really hear from him last year on a very poor third level team. He did show well in pre zeason, but still a risk.
- we end up with Kroos playing holding mid at times due to only Casemiro as a DM (apparently no confidence in Llorente) and with likely rotations between Isco, Modric, Casemiro and Kroos. Ceballos is the main backup, which leaves little playing time for Valverde or Llorente.
- We are heavily reliant on Bale and Benzema, and although both seem good so far, their history suggest injuries and poor performances. Mariano is better than Mayoral, but he is not a starter and neither is Lucas.
The other forward spot will be filled with Asensio, Isco and Vinicius. This fits with the change in tactics, but all three of them have to step it up, for this team to be successful.

All in all, there are a lot of risks and doubts. I’m hopeful, but worried.

Casilla did not find a club so  he is staying as 3rd GK and Luca is going back to castilla. So the only 3 GKs for the 1st team are Courtois, Keylor and Casilla

Reguillon will back up Marcelo

and Vinicius will get more and more game time as the year goes on, he is still very much part of the first team
_________________
Madridista naci.. Vikingo sere y Merengue Moriré

Mariano given the no7. Perez letting out alittle chuckle

@Valkyrja wrote:The downgrade from Raul to CR is more significant than this

After seeing all this bullshit about the UEFA award and Ronaldo commanding his posse to defend his "honour" I'm so happy we're done with that drama queen.

To be fair to him, Mariano is not replacing CR7. He has been brought to score goals since our main CF is incapable of doing it.

I'd save that sass for a week where Benzema hasn't scored tbh.

Until he starts scoring regularly and without handouts from Ramos, my statement stands.

Page 24 of 25
Permissions in this forum:
You cannot reply to topics in this forum
Latest topics
» Who will be the Democrats' presidential candidate against Trump?