Yeah, against a Barca side that was still adjusting to Valverde in August. To try the same thing again with a very competent manager in December is asking for trouble, to which, we got in heavy doses.

In any case, the Clasico is over and nothing can be done about anything till January. Let's see if Zidane can recover or if he'll get the same treatment as other managers have.

damned if you do damned if you don't. with the way our offense has been we'd have most likely still not won regardless, and if kova had been on the bench, it would be "how could he leave kovacic who had a good game against barcelona on the bench"? bigger problems that we had than the kova isco situation imo

Nothing wrong with starting Kova, I wish he started more. To have this obviously talented attacker play sled dog again and not expect Valverde to counter it some way was asking for trouble. Then again, no matter what, our strikers are so shitty that it totally doesn't matter anymore.

I don't remember Real Madrid ever having a more inept striking group in terms of production.  You guys remember anything similar or worse?

@sportsczy wrote:I don't remember Real Madrid ever having a more inept striking group in terms of production.  You guys remember anything similar or worse?

I'm half inclined to put Ramos up front and see if he can't bully a few balls into goal.

Nope, I can't recall our forward line ever being this impotent. I've been positively surprised by Bale's brief performances since he returned from injury, though. Now, if only he can stay fit...
_________________

Yeah I think this may actually be the club's worst period in terms of forwards which is absolutely weird since it's a club that prides itself on always having great forwards.

And it's not like we have some prodigy in the waiting, we don't have anyone. Puskas & Di Stefano ended up being replaced by Amancio & Santillana. The latter got replaced by Butragueno with Hugo coming in. The former got replaced by Raul and the slew of great forwards like Mijatovic, Zamorano & Suker. Morientes chipped in too. Then came Ronaldo de Nazario. Then Van Gol. Then both Raul and Van Gol got replaced by Higuain, Benzema (lol) and Ronaldo. I mean, we have Bale but he is way too injury prone to be dependable and not that younger than Benzema.

If going by the standard passing of the striker baton, Morata should have been the one to be part of the strike force and Benzema shipped off and/or benched but that is now a dead issue. We don't actually have anything waiting and it sucks.

Just waiting for Sports now to say either Morata isn’t good enough or to say that the fact that we didn’t have a plan B is not attributable to Zidane.

he’s trying to convince us Zidane’s tactical brillance against Barca failed because of players!

Well Morata is actually still not good enough. Despite all the hype... he's barely going to break the 20 goal all comps total at Chelsea. He has 12 goals and 4 assists on Chelsea so far and that's despite being the absolute only true out-and-out striker on that team.

He's decent... but nothing all that special. At 25, he's never going to be special either.

You’re missing the point, Morata is miles better than Benz and Mayoral. Hell his record is better than Ronaldo and Bale. If he had to go, then for god sake bring in a replacement. That’s the issue

He wasn't better then Benzema last year when you think about it...  Benzema played all the tough games and they had the same stats basically.  I really think that we thought last year was an anomoly for Benz and he'd return to his 25 or so goals and 10-15 assists per season that he had been doing on average for the previous 5 years.  He finished the season strong too.

Didn't anticipate that he would just go down the toilet.

I also got the very very very distinct message from more than one person that Mbappe was Madrid bound.  We counted on it.  But we dragged our feet to get a few extra euros for Morata and it became a bidding war. for Mbappe.. and we couldn't pay up.  We also couldn't guarantee him that he would at least start the season as a regular... which every single other club after him did.

i agree that i don't think morata was necessarily the one to lead us into the next era, i thought when we sold him though we'll splash cash on someone and send benzema to the bench

i vehemently disagree that benzema was better last season, we can't use the "he played tough games" argument, or morata played against tired legs. if that's the argument we're going with, every substitute striker over eons of years should have more or as many goals as the starting striker

forget the stats and numbers, based on my eye test alone morata was miles ahead of benzema last season, so too was isco. and from an attacking standpoint sergio ramos too, i mean the guy had almost as many goals as benzema last season...that's a HUGE shame.

In terms of raw scoring effectiveness, you're absolutely right tito.  Benz played roughly 3400 mins and Morata 1900.  So it's a 64/36 split.  But it really does make a big difference if you play all the big games against the better defenders.  The results get skewed.

I'm not saying Benzema was great... or even good...  but he was serviceable and Morata offered a great change of pace/bench joker to hit teams with.

I thought the position was effective with 39 goals without either of the two blowing anyone away. We really did get good production out of the CF spot last season when you think about it.
_________________

Before Morata it was Higuain who outscored him as a sub. Coincidentally also in that one season when you won the league before.

most starters play against the better defenders. yet its not everyday you see subs getting the better numbers over them. if who played against better center backs is the issue, then almost all subs should be tallying as many or more goals than the starting cf. and mind you before that season started i was on record here saying benzema was better than morata. which was me not really rating morata after his spells at juve, than having any confidence in benz.

i felt we where only bringing him back from juve to be a chicharito/mayoral and only play when benz gets injured, but he proved me wrong.....and i appreciated that

@futbol, i don't really count the higuain one, yes i get what you're saying, he was a sub, but higuain then and morata last year , i don't know the status was different. morata was really only meant to play if benzema was injured, but he ended up earning his minutes. benzema and higuain were really being rotated, with benzema having the edge as first choice.

i'll give benzema benefit of doubt on that, its not like higuain was some rough behind the ears striker lounging on the bench, higuain still had almost starter type minutes and was still having his ucl phobia. i think in all comps he had less goals than benzema

if benzema played 85-90 mins in all games last season, best believe we would not have won la liga. he played those mins cos he was stinking up the joint, there's just no excuse for that no matter how we slice it. defenders were tired, the sub played easy CBs, etc....

i mean benzema played against some poor center backs too, every defender in la liga isn't maldini. he was poor and morata was better, end of story really. and now he only has 1 more la liga goal than mayoral who i do not rate at all, because i see his role here simply as a pawn . its really disgusting

I had to look it up, Benzema really has one 1 more goal than Mayoral. Sigh. 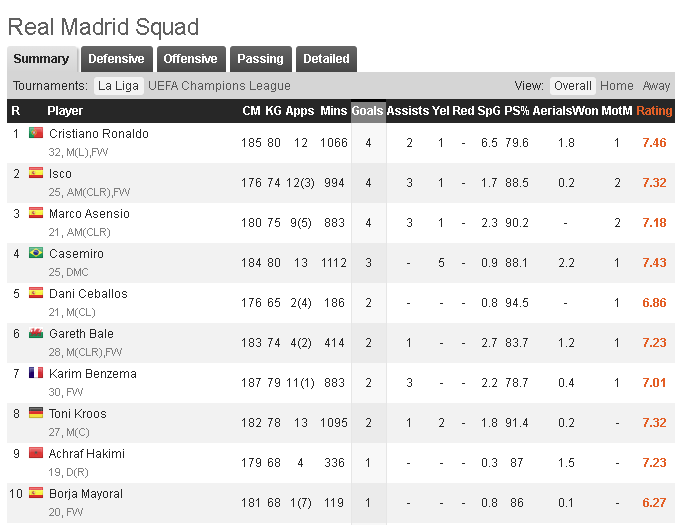 When I said Morata was miles better than Benz and Mayoral, I was talking about this season. his numbers are better than not only those two, but Ronaldo and Bale as well.

I wasn’t referring to last year although I certainly do feel he was way better than Benz.

My point was it was Zidane’s fault for
- not having confidence in Morata over a pathetic Benz,
- selling Morata and Mariano with no replacement
- putting all bets on getting Mbappe.

morata was 1 of the most clinical striker in 2017.


There's nothing Benzema could do that would surprise me. He's undoubtedly the worst CF in Europe, and very possibly, the world at the moment. But he'll continue to start for Madrid no matter what.
_________________
I ****ing hate Komodo dragons

Today at 6:03 pm by BarrileteCosmico

Today at 4:03 pm by BarcaLearning