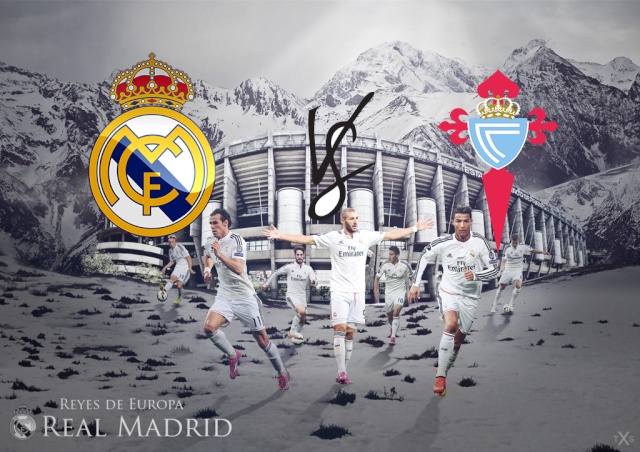 Latest News: Bale and Marcelo have recovered and have been included in the squad.

I'd like to see Danilo this time as well. He played excellent for the past couple games, at LB and RB respectively, and I think he deserves another shot. Rest Carvajal for the Roma game and let Danilo play and give me more reasons to support him.

Nacho also needs to play this one. Marcelo shouldn't be rushed into full games, just yet. Let him play the last 20 minutes or so, and let Nacho play the rest. I like him, he's calm, composed and intelligent.

Vasquez, after his great game against Levante, needs to start as well.

This is going to be a highscoring game. Celtas attack is scary but their defence dross. Like doC I'd like to see Nacho, Lucas, Mayorl and Danilo start this one. They deserve it after their midweek performances. Something tells me though that Jese, Kovacic and Casemiro are going to play this one with Borja getting some minutes at the end. Meh dont care the league is lost anyways

I really like this team. Nice 442 shape when defending, when Carvajal attacks and Celta break there is always someone there to cover. Lucas always tracking back. The movement when we have the ball is top notch. Makes the defenders lives alot easier. When we play Barca i hope we start Lucas. That guy has been excellent all season and gets no credit for it

Mayoral is a talent

Nice performance. We outpressed Celta (is that even possible). Borja was excellent he deserved a goal for this performance. 10 players attacking and 9 players defending. You cant ask for more. This is the kind of line up i want us to play in our tougher games, we were excellent against PSG and Bilbao when our fringe players started. Then got embarrased vs PSG and Barca with our regulars. I want Lucas to be a starter, he might not be perfect but he is a damn engine

Back four particularly Danilo and Pepe

Did anyone notice Nolito because i didnt

Lets see who Zizou lines up against Roma midweek. When Borja got subbed we played a 442 with Bale on the left and Lucas on the right. I wouldnt mind seeing that vs Roma. Bale plays some nice crosses. Having 2 attackers to attack them will be useful
_________________

Danilo really has been getting more comfortable and showing why he was so expensive.

"Omg Madrid are back"

Ronaldo's 4 goals might be grabbing the headlines, but our best players in this match were Lucas and Casemiro. I wouldn't mind watching those two starting in the bigger matches.
_________________
There is no God but Florentino Perez and Zidane is his messenger.
"Noventa minuti en el Bernabéu son molto longo" ~ Juan Gómez González Juanito

@Perucho21 wrote:"Omg Madrid are back"


First and foremost, Cubillas is probably one of the finest attacking midfielders (and least talked about) to come out of SA. Also, my FB as well

I too wouldn't mind Casemiro and Lucas starting in bigger matches just to see if they have mettle to deal with such things. It shouldn't, in theory, be an issue for Casemiro as he played some big derbies while in Portugal.
_________________

I honestly don't believe zidane doesn't acknowledge that but rather he picks the team to the tune of Flo.
_________________
#WEAREALLTAXFRAUDS

Just finished watching the game. There are some things we should really be excited about, and others not so much.

Notes & Player Assessments:
1. It's insane how superior our work rate becomes when we field the 'right' lineup. Some of our guys are brimming with energy, loyalty and selflessness. Those are the ones who need to start the big games, not the 'Big Names'.

2. This is Danilo's third straight great game with us. The guy is really making me revisit my original opinion of him. If he keeps playing like this, I won't be surprised if one day I choose him over Carvajal or even Marcelo.

3. Navas was unlucky for that goal, it was brilliantly executed and he couldn't have possibly done anything to prevent it. Other than that he was brilliant. Which brings me to my second point, I really hope he stays with us beyond this season. Let's for once in our lives give the gloves to the less hyped, albeit more deserving keeper.

4. Carvajal: He wasn't up to his usual standards, Danilo played better than him at LB and even when the Brazilian switched to RB after Marcelo was brought in, he still played better. Still, Carvajal had some brilliant moments.

5. Pepe: was surprised with how often he gave the ball away, either through poor clearance or pressure. He also tends to complicate things a little bit; in that I mean, when your teammate to your left is open, don't pass it to a distant and more guarded teammate. He also made a foul in the box by pushing a Celta player from the back. A more strict referee would've called it. Other than that, he was very solid.

7. Kovacic: brilliant with his diagonal runs, his work rate is also something to appreciate.

8. Casemiro: simply magisterial. Kroos would be a God in a team more suitable for his profile. But at Real Madrid? Man, I would definitely pick Casemiro over him.

9. Vasquez: Superior work rate, offensively and defensively. I have only one problem with him, sometimes he overdoes it with dribbling. It's a good thing, don't get me wrong, but when you have an open angle for a cross, don't overdo it by dribbling your way into a roadblock, cross it. Still, I think he should be an undisputed starter.

10. Mayoral: Not his best game. But there's something he brings to the table which Benzema doesn't: constant pressing and superior work rate. With a guy like him, I wouldn't miss Benzema at all.

11. Ronaldo: very poor defensive display, godly offensive masterclass. That earth-shattering missile, that divine free-kick and that brutal header is why he's widely perceived as one of the most complete strikers to have ever graced the green. El Kommander

12. Jesé: Here's my problem with him: sometimes, just like Lucas, he overdoes things and ends up wasting a great opportunity. This time around he didn't do that. Instead, he played well, scored a great goal, and more importantly, he has a great work-rate.


Now, the game itself: It was a very poor first-half, and a better second, although Celta's defense played a part in it. We seemed unable to tear down their wall and we allowed them some space at times, which could've resulted in two goals, had they been more clinical.

But here's the thing, with runners and hard workers on the pitch, even when we lost they ball, we recovered it quickly. Even when we seemed unable to score, we still had everything under control. This would've been different had the big names played yesterday.

I honestly believe that Casemiro, Vasquez, Jesé, Kova, Mayoral and Danilo should now get 50% of the team's playing time...if not more. And I think our season would've been different with these guys.

Yesterday at 10:44 pm by Nishankly

Yesterday at 9:53 pm by Robespierre

Yesterday at 9:33 pm by Unique

Yesterday at 9:06 pm by Lucifer

Yesterday at 8:48 pm by Zagadka