Time for some rotation. We are playing at home against a team that is tipped for relegation. Carlo has no excuses

According to Marca/Cope Isco, Chicha and Navas will likely start. Hope Illarra and Nacho do too

Just gotta get that W tonight. It would be great if we could continue our goal scoring form but I'm not going to be too greedy. We should only really be thinking about the three points since we are already six points behind. 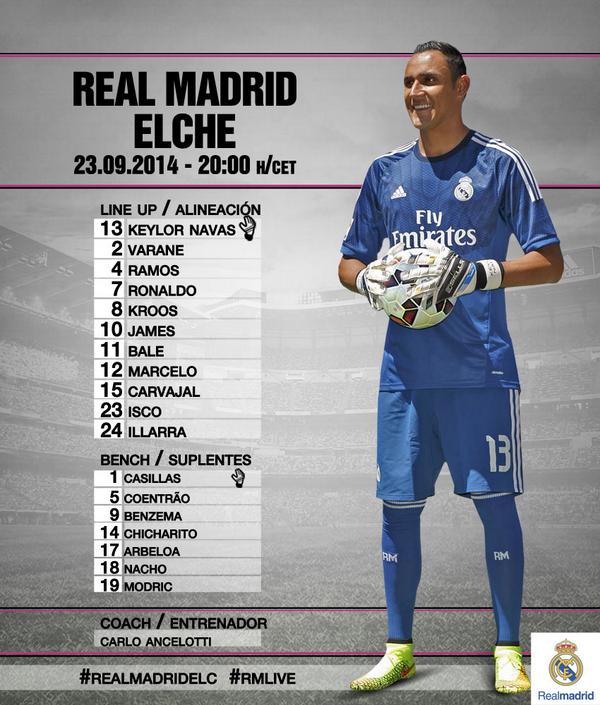 Now give us a feast please

Not bad not bad

Madrid fans do not have a healthy attitude towards their match day threads i must say (no disrespect), no comments,no posts, even with cr7 having a field day? And madrid having an impressive match? Or do u guys not watch these matches?

@Bankz wrote:Madrid fans do not have a healthy attitude towards their match day threads i must say (no disrespect), no comments,no posts, even with cr7 having a field day? And madrid having an impressive match? Or do u guys not watch these matches?

@Bankz
We don't get too excited by scorelines per se.
We study our matches critically and take a lot from them asides the goals.
We know how good our players are and what they are capable of.
Here comes the cocky part: we are madrid! The whole world expects us to always be phenomenal, not average, not good, not very good, but phenomenal.

There is stil a lot lacking in our team chemistry and defensive balance and until that is fixed, you would not see as shouting and dancing on 5-1 or 8-2 or even 10-3.

Hala madrid guys!
We are improving

@Bankz wrote:Madrid fans do not have a healthy attitude towards their match day threads i must say (no disrespect), no comments,no posts, even with cr7 having a field day? And madrid having an impressive match? Or do u guys not watch these matches?

You may call it cocky or arrogance, but we know what to expect from matches against the likes of elche....a draw or a loss would see an increase in posts obviously....but we don't feel like we need to act like we just won the champions league by beating sides like elche....ironically enough, sometimes I criticize the bernabeau for similar attitude when they refuse to chant loud enough lol......but yeah c'mon in all seriousness, there's no need to gloat about this, we're more focussed on players getting in rhythm for the next game and the long season ahead

Fußball wrote:I think this should be your standard formation. 4-4-2 with Bale and Ronaldo upfront and 4 midfielders behind.

4-4-2 - against smaller teams can work. But given Madrid's defense is average it needs more cover against stronger teams. Even in today's match Elche had quite a few scoring chances.It will be difficult to play with this formation with out conceding goals.

Illaramendi
I think he was great and justified his starting spot.
He seems to have covered more ground than kroos and was more aggressive but I would like to have seen him spend more time in our half than in the opposition's half because there were times both he and kroos shun their defensive duties.

Kroos
Kroos has improved his work-rate and tackles more. He had the freedom to move forward but he dint need to. We already had 2 forwards and two AM.
His attacking forays were part of the reasons we got exposed at times.

Isco
He was great and tracked back almost with a di maria type of energy.

Bale
In the past matches, he seemed isolated on the right and only sprung to life when moved in-field.His success in a front-two against depor was one of the reasons ancelotti decided to use that formation but again he was isolated in front and his only telling contribution throughout the first half was the goal.
He only sprung to life when he moved back to the right.
That dude is just confused! He should decide where he prefers.
I believe the problem is the player not the position.

Ronaldo
Was ronaldo, he seems to pass more and has less shots on target.

James
I honestly rate this guy has the least talented attacker in our squad alongside chicarito.
It doesn't mean he is bad, he is just not spectacular.
Isco is better than him and if not for the price tag, isco should start ahead of him.
I believe Jese has a chance of benching him since the president rates Jese as a Galactico.
Anyway, he pressed very well, but he is slow, can't keep the ball to his feet for too long and he can't take players one on one.
He only kept the ball moving with simple passes.
Apart from his assist to bale, nothing special.

Varane
Was varane and played a good game. I hope he keeps starting.

Marcelo
Was marcelo
Caused a penalty and had an assist and was a constant menace in the opposition's half.
His tackle in the first half was meant to be a red card though, he got lucky.

Keylor navas
Had a good game, he wasn't threatened but he almost caught that penalty which says something about his ability

Good game, but it wa just elche
If we have a good game against villareal, then we can start getting a little bit excited

@shadexticos wrote:but it wa just elche
If we have a good game against villareal, then we can start getting a little bit excited