Illara had a fantastic game. Kept us ticking like a metronome and held his position well.
Marcelo was superb attacking. Ronaldo is fantastic and keeps scoring at an incredibly high rate. Benzema ran but still ineffective.
Man of the match has to be Di Maria

Good game from everyone, although nothing can really be taken from this game considering it's Copenhagen. Also they did create chances to score goals, so defensively things need to improve.

Right now there's no solid shape or organisation when defending. Either the team plays a highline and defends, or sits back how Atletico do.

That being said, there were a few who were completely sh*t and undeserving.

Marcelo was just incredible and Ronaldo tracking back constantly

I'd like to point out something that I have observed over the last season and this match. Pairing Varane with Pepe/Ramos always gets the best out of them. Question should be who do we play next to him. For me Pepe is less brutal (believe it or not) but he is more mistake prone I like his athleticism though so I would probably pick him

Also I am not happy by how little playing time Jese is getting 5-10 mins seriously?? now I know Carlo doesn't want to sub benz early but if we are leading by a large margin he should. Jese deserves to play as a regular forget a sub scraping for minutes

Anyways my MOTM is Illarramendi. He was just the best of the bunch

Marcelo wasn't even fully fit, and see the difference. Varane comes and we don't concede

I will ask one thing..tell me one productive move Di Maria did until 60 mins?

DiMaria as well as our other fowards were not that good in the first half. it was alot of misplaced passes and slow build up play from them. Marcelo was probably the best attacker then. In the second half on the other hand they all turned it up a noth and DiMaria was unplayable and was named motm at the end of the game. He had the second most keypasses in the team after Marcelo before his first goal. He got a 10 rating on whoscored. Has anyone ever got that including Messi

just out of curiosity

offensively Ronaldo, Marcelo and DiMaria were our best players and defensively Dani, Varane and Illaramendi were the best
_________________ 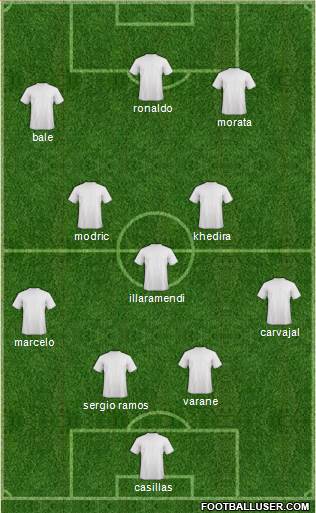 the three man midfield was good.

Id still try out Casemiro in place of Khedira and see how that goes. Surely he can't be much worse. Khedira slows our build up play everytime he gets the ball and his shot in the first really showed his limited ability on the ball

It was only Copenhagen though who were very selfish and slow to make their minds up I noticed. Don't know if the 4-3-3 will work long term but Modric definitely tracks back alot more than Isco who struggles to do it for consistent period of time. One thing that should be clear is that Marcelo and Dani can't be moved from the starting 11 unless they get complacent which I don't think they will do. They are leaps and bounds better than Arbeloa and Arbeloa jnr respectively

I noticed that we pressed high up and both Ronaldo and Benzema were full of running for once. it clearly showed in our ability to recover the ball high up. The players seemed to have clear roles rather than the clusterfck we witnessed vs Elche and Atleti

we won big vs Getafe and Gala as well but we were never in control of the game in those two games. Diego Lopez saved us in both those game. This game on the other hand saw us break up every one of their potential attacks apart from that 1v1 they had at the very end. Hopefully we could see this against Levante this weekend. *fingers crossed*
_________________

I will ask one thing..tell me one productive move Di Maria did until 60 mins?

He did nothing but cross it to oblivion in the first half....had a fantastic last 30 mins but that doesnt make up for his poor showing of the first half.

I saw the match again yesterday, even i like you thought Di Maria didnt do anything in the 1st half.

Watch this, Di Maria was the one threatening to break the Copenhagen defense, even in the first half. Watch his movement on the offensive lines. Di Maria and Modric. Very impressive movement.

Today at 1:47 am by The Demon of Carthage

Yesterday at 9:31 pm by RealGunner