lmfao looks like someone sucked off all the blood from him

The patch will be released early november.

Had go at PES tonight after not playing it for a good couple of weeks, realised why I stopped playing it in the first place.

While this game had a lot of potential, it was released too early. Apparently Xbox players can't even play it online after a month. Online is crap, on PC at least. Sure, no rain, faces, stadiums etc. but more importantly the gameplay itself has a lot of annoyances that should have been ironed out prior to release. It is a huge let down, because when everything works in PES it feels close to real football but unfortunately 90% it does not work.

Agree with most of that.... just think the engine in reality is a next gen engine trying to break free from its current gen clutches.

Something is holding it back but anyway....

So tinkered around with personnel and systems for a bit and settled on a 433 that i find works really well. 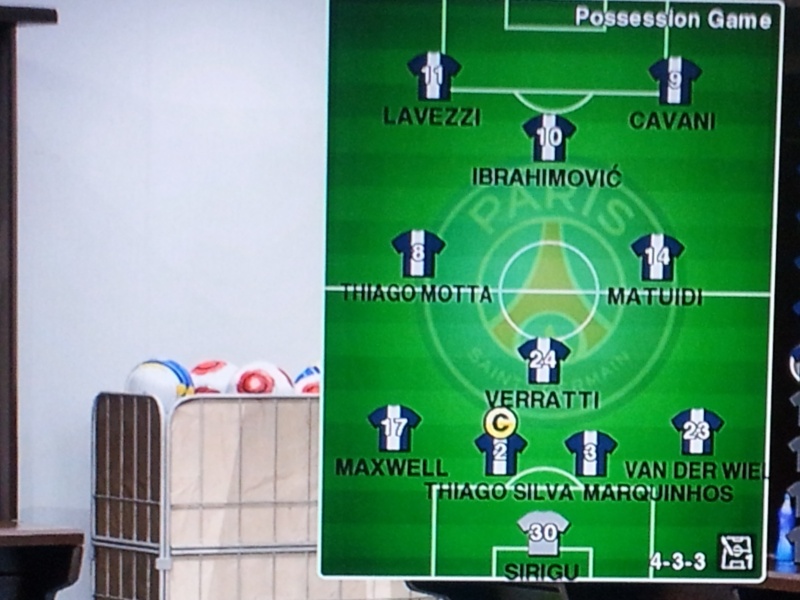 The thing i liked about it was how tactically diverse but not only that it was really free flowing....

For example there were times it changed into a 442 off the ball...


Veratti would push up alongside Motta and Matuidi would move a little bit to the right while Cavani would come off the right side alongside Ibra with Lavezzi dropping back into left side of midfield 4.

I really liked that because it showed tactical understanding when necessary and it would also change back into 433 extremely quickly on the attack.

For example in one game i played Juventus.... the 442 i mentioned was in effect when Juventus had the ball but when Lavezzi stole the ball from Vidal it almost instantaneously became a 433 when i broke forward.... Motta and Matuidi both split apart again and Verratti dropped deep into his regista like role with Cavani moving off slightly to the right again.

In all of this another theme of the tactics sliders and formation i chose to use was that when Van Der Weil and Maxwell got forward and this would happen with regularity..... both Matudi and Motta would drop back into fullback roles.

There was an occasion where the 442 i mentioned without the ball looked like this....

Sirigu
Matuidi Marquinhos TS Motta
Van Der Wiel Verratti Maxwell Lavezzi
Cavani Ibra
Although i must mention that when the midfield went into a 4 it was quite a narrow 4 so if Maxwell and Van Der Wiel were at fullback or ventured into midfield with Matiudi and Motta covering them the idea of the fullbacks being the source of width always stayed the same.

I really enjoyed watching this sense of tactical intelligence and diversity on display through out the match and plan to test out more systems with different teams to see what the results are.

Pls someone help me

I thought by now I would of figured it out, but first time finishes just arent working.

First of all, its random. Maybe 1 in 10, the player will shoot on his first touch.

But second, it makes crossing and corners just pointless. They dont even try to win aerial balls.

Tbh Dani its the same for me too.... it just doesn't respond for some reason.

Which is weird because the one thing i really really liked in the demo was how the heading and first time shooting would work from crosses.

Seemed leagues above recent games and for some reason they scrapped it.... god knows why hope its fixed.

I mean sometimes i get lucky but most of time the player just takes a touch then shoots.... annoying.

Its baffling. Every once in a while it will happen, I first thought it you actively press L1 and move the player a little you can do it...but no, not working either.

I just been trying it on basic shooting.... don't have the control of advanced but at least its responsive....

Basically when i want it to hit first time it does and when i want to head it... it does.

Awful miss mind but it works at least lol.

I love advanced shooting for the most part, my finishing is hit and miss but I have real control over the shots with advance.

BTW, another problem...the finesse/control shot with R2...totally broken, wtf is that about?

I agree btw.... i just heard a rumor that on basic shooting equals no delay and its true.

Problem is while advanced is better in practically every way imaginable but its not responsive.... its practically broken.

Its been mentioned in the massive patch coming in November that as part of the gameplay tweaks they are adding shooting fixes and improvements.

I hope to f*ck that making advanced shooting responsive is part of that because playing on basic is annoying.... despite the fact my heading and volleying is working lol.

on R2 finesse its the same story on advanced it basically doesn't work.... advanced shooting potentially really should be the only choice but its broken despite its massive advantages over control and power.

Yup there's been some good ideas this year but not implemented too well tbh.... all seems a little rushed.

Just get fifa so we can rant in unison

Buy me it and i'll play brah.

Dont buy me it, I still wouldnt play.

No matter how much I complain about PES, I still wont buy FIFA.

@Great Leader Sprucenuce wrote:I don't know how this happened by i some how have Dortmund in round 32 of EL

Finally got rounded to completing this tie

and lost 2-1 on aggregate to this Hummels golazo ffs.

Maybe should of played offside trap, I am guessing it was he who kept him on to have to make that tackle.

Yeah it was Santon.... problem there was the rest of my defence pushed up too high and no one pressured Lewandowski to slip in Pizza Cheque i thought i got away with it with Santon's tackle but then Hummels strolls in and lobs me Philippe Albert style

At least the league is going well.... 4 points clear at start of February although i did just lose to West Brom lol.

Lost twice in the league and those defeats are to Sunderland and West Brom ffs.

Yeah, nothing more annoying than 3 defenders pressing up and frecking fullback playing deep. I like you can manual adjust how high your line is during the action, dropping deep on command has saved me a few times..aswell as everyone pushing up. Nice you can do that with a simple push of a button.

I started a season with Arsenal, depending on the opponant I sometimes play Sagna and Gibbs as LM and RM. If the opponant is weak and they press (especially in a 442) I want to punsh them but creating space in between as many lines as possible.

Send those fullbacks to wide midfielders, drop a midfielder into DM and spread the CB's super wide. One of them always has time on the ball. Then, two in midfield vs the opponants 2, play noone as a striker but instead a AM or SS and therefore having an extra player in front of the midfield line and now behind it.

Sometimes I play Giru instead of Neymar, move Neymar instead of Theo and play Santi withdrawn on the right.

Im trying to hunt down a holding midfielder, which is proving impossible.

Also looking back i think the real problem there is i got far too aggressive.... Colo pushing all the way out to Gundogan once he's taken out of the game its difficult... the pass goes to Lewa and my RB Zuniga doesn't push out quick enough but it is difficult as Lewa hits it first time into the space.

As for the tactics.... most of the time in have been trying a lopsided 433 with Remy close to being an SS and Ben Arfa holding more width but seeing as i try to cut inside all the time with him it defeats the purpose

but recently i got annoyed with my inability to break down the midfield so tried Ben Arfa as a false 9 which is kinda working so far but i got arrogant and went back to the 433 against West Brom and lost.

I'll probably look to getting more creativity and width in the team come the summer window if i can afford it.

The real question is how the f*ck did you manage to get Neymar?

I made 3 signings in the summer: Lukaku, Zuniga and Djuricic( Benfica) and i basically had nothing left afterwards

Page 25 of 27
Permissions in this forum:
You cannot reply to topics in this forum
Latest topics
» Who will be the Democrats' presidential candidate against Trump?