No, Mourinho chose his players to make his tactics work best. If Mourinho wanted to put together a side that will handle high level of possession and be efficient, he wouldnt have signed Khedira, Di Maria, he certainly wouldnt have said he "doesnt know where to play [Sahin]". But he cant play that way so that's that.

When Pellegrini was at the club, he insisted for us not to sell players like Sneijder but no one listened to him. He was left with Kaka who doesnt fit the football he plays. He was thinking about signing someone like Silva or Cazorla to have him play with Sneijder in the midfield. Even in the summer, we stopped our contacts with Silva when Mou arrived because he thought Di Maria fit his way of counter best.

i really like ramalho,he always has a pretty defined 4-2-2-2 formation.1 attacking LB,one ball playing CM,one destroyer,one CM/AM,one creative AM,one CF and a SS who he always builds a team around 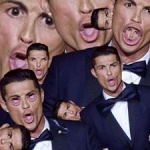 Ozil reminds me of Socrates....

Madrid really lacks some players to do a formation like that, Ozil,Sahin,Benz and Marcelo would fit in.CR does not have the passing and dribbling skills of Muller or Nerman,there is no destroyer and there are no fast CMs with good technique to connect attack and midfield in counters

this is just for fun though,it will never happen lol

_________________
My name's unique and I've drunk more beer and banged more quiff and pissed more blood and stomped more ass that all of you numbnuts put together.

I was in thinking more along the lines of.

Senna is just to give you a idea of the player I want, there is no other player as good as prime him at the moment.

He's probably the most important player in the formation along with Sahin who'se ability to play the final ball forces opposing DM's to leave their comfort zone to come out and cover him.

I don't like Arbeloa there to be honest but he can work good enough.I would replace him with someone who posesses more attacking insitinct to ensure fuildity.

I think Benzema can be the SS but if he isn't the same concept applies.He can move into the space vacated by the opposing DM and create space for late runs into the box from the Am and the SS.

Marcelo and Ronaldo with the width, DAT tridente, DAT creative partnership of Cazorla and Alonso, DAT defence before it's time