Alejandro Fernández Iglesias (known as Álex, born 15 October 1992 in Madrid) is a Spanish central midfielder who plays for Real madrid Castilla. He is the younger brother of fellow Castilla player Nacho.

He started playing in youth teams of Alcala before moving to Real Madrid on 2005. On July 2010 he was called alongside four teammates by the first team coach, Jose Mourinho, to a preseason tour in USA .He made his unofficial debut with Real Madrid on 5 August in a friendly match against Club America, in a 3–2 win. His brother, Nacho, also made his debut that day.
He made his league debut with Real Madrid Castilla on 29 August against Coruxo, in a 3–2 victory, and scored his first goal against Cerro Reyes on 3 October.
On 6 March 2011 he finally managed his first team debut in La Liga, playing the last minutes of the 3–1 away win over Racing de Santander.

He is our future hope for the regista role, a complete CM who could dictate the pace of the game. The only guy who could fulfill his role right now is Sahin. Whether Sahin succeeds in the short run is another story. Long term, Alex is a very exciting prospect. I watched him quite often in Castilla games, he is the one who holds that crappy midfield together. CMs like him are as rare as leftbacks therefore I hope that the club develops him properly like we did many years prior with Ruben de la Red.

Does he play like Granero ? i mean is his job dictating the tempo and controlling the game ?

El Pipita wrote:Does he play like Granero ? i mean is his job dictating the tempo and controlling the game ?

Granero can't dictate the tempo and control the game. Alex does...

He could also play B2B, his shooting outside the box is A+

his tackling is rather good too
makes up a load of ground and cleans up the crap that Mandi, his usual midfield partner, creates.
Mosquera is back and expect more help for Alex in midfield
i think his season will take off
_________________

He is also very very good at pressing the ball and causing alot of pressure on the opposition.

Unless we have a management that really wants to promote and utilize the cantera, Alex would probably end up elsewhere in Spain

There are 3 players I want to succeed in this world, and those are Granero, Alex, and Morata 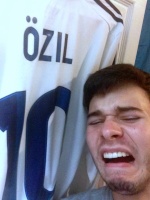 I want jessi, Alex, Nacho, Sarabia and Morata in the team in the future.